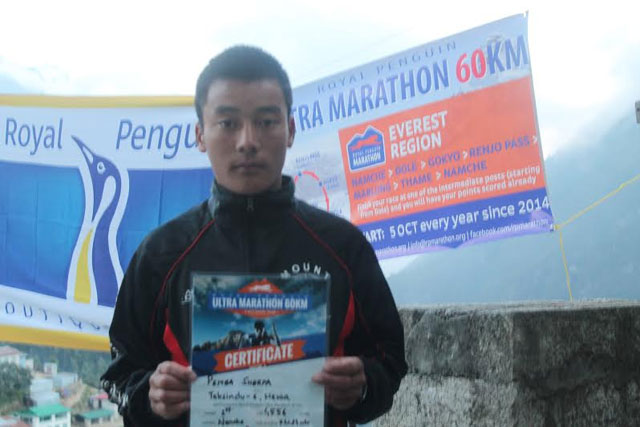 Publication in “My Republica”

read the article in the newspaper

Pemba clocked 7 hours and 24 minutes to complete the 60 km race ahead of 18 other participants. For female title, Ang completed the route in 9 hours and 11 minutes.

“This is the first marathon that requires participants to climb uphill before nosing down to the lower elevations,” said chief organizer Elka. “This is why the marathon stands out as one of the most difficult one ever held.”

The challenge-factor, however, is surely not the only factor to define the ultra marathon. Climbing through Renjo Pass, the most difficult part of the marathon, the individuals would get the spectacular view of a range of Himalayas, including Mt Everest, Mt Cho Yuo, Mt Thamserku, Mt Thamteka, Mt Amadablam, among others.

From Renjo Pass, the sprinters climbed downhill to Thame Valley (3800 meters) and then back to Namche Bazaar.

Out of a total 19 participants, 12 were Nepalis and seven foreigners. Altogether three runners failed to complete the marathon within the given timeframe.

Finishing first toward the male and female categories, Pemba and Ang bagged a purse of Rs 30,000 and Rs 10,000 each.

“The route was really hard to complete,” Pemba said. “But I pushed myself into the mountains and finished it first.”

Ang, who is a trekking guide by profession, is also the winner of Tenzing-Hillary Everest Marathon held last year.

The marathon was organized by Royal Penguin Adventure under the sponsorship of Royal Penguin Boutique Hotel, based in Thamel, Kathmandu.
Published on 2014-10-07 09:35:19