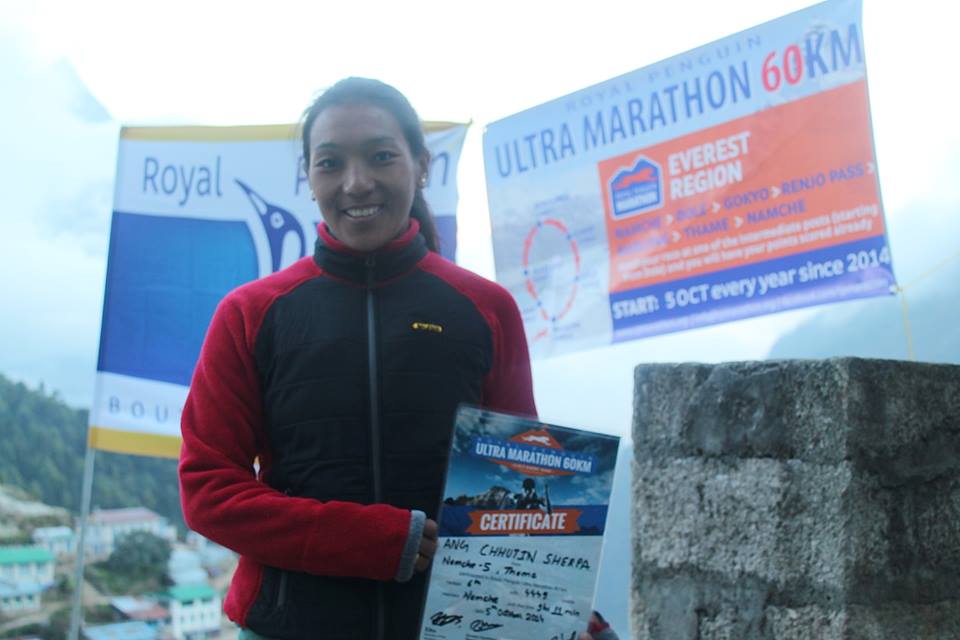 KATHMANDU, Nepal–Pemba Sherpa and Ang Chhuting Sherpa won the first edition of the Royal Penguin Ultra Marathon at the Everest region under male and female categories respectively, Monday.
Pemba accomplished the 60 km race timing 7 hours and 24 minutes under male category while Ang took 9 hours and 11 minutes under female category.
Ang, who is a trekking guide by profession, is also the winner of Tenzing-Hilary Everest Marathon held last year.
Upendra Sunuwar and Karma Sarki Sherpa ended 2nd and 3rd respectively towards ‘Male’ category. Likewise, Pasang Dikee Sherpa and Canadian national Elka ended 2nd and 3rd respectively towards ‘Female’ category.
Out of a total 19 participants, 12 were Nepalis and seven foreigners.
The race began from Namche Bazaar at 3 am in the morning and went uphill towards Gokyo and then to westwards to the Renjo-La.
The paraglider would get the thrilling view of a range of Himalayas, including the Mt. Everest, Mt. Cho Yuo, Mt. Thamserku, Mt. Thamteka, Mt. Amadablam among others.
Pemba and Ang bagged a purse of Rs 30,000 and Rs 10,000 each. While Pemba took 7.24 hours to complete the cycle, Ang took 9.11 hours to cross the line.